Cotton - Back To The Future

The year 2018 has not been kind for many investors, and cotton (BALB) bulls are no exception. At the time of writing, active front-month futures are trading around $0.72, down more than 9%, from $0.78 at the beginning of 2018. Currently, I expect prices to trade around $0.70 to $0.80 for the next few months. Buying the dip on low and selling into any short-term rally may be the best way to play the cotton market.

During the season, Pakistan suffered one of its worst floods in recent history. Some ready cotton crops were reportedly destroyed. India, the world's second largest cotton exporter at the time, placed export restrictions due to rising domestic prices. Australia was also reportedly suffering from floods and unfavorable weather, and production figures were expected to be low. In October 2010, the USDA cut cotton production and stock estimates for China and cotton prices immediately reacted. The already expensive cotton rallied from $1.00s early October 2010 to $2.20s March 2011, as the wildest dream of every cotton producer and bullish speculator came true.

Veteran commodity traders knew such crazy price spikes cannot last. Farmers reacted to $2.20 cotton and planted more cotton next season; meanwhile, the demand side of the equation suffered due to high prices, cotton shortage eventually eased. Prices fell like a rock ever since, reaching as low as $0.55 early 2016. 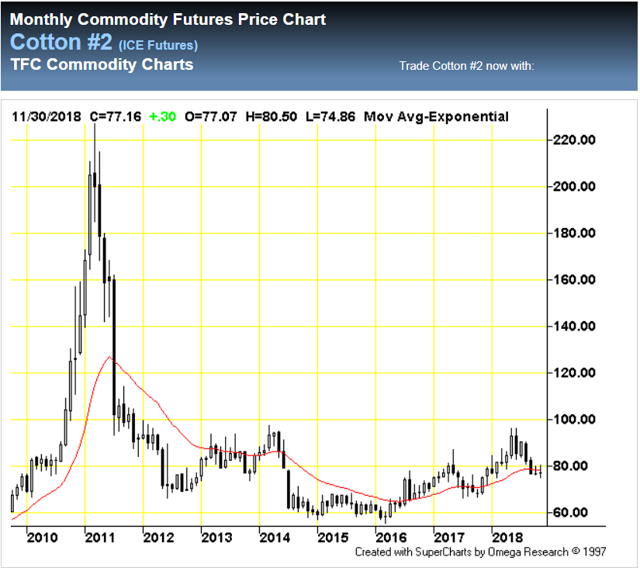 While $2.20 may be memories of a distant past for us, its legacy remains. China, seeking cotton supply security to protect itself from future shortages, established a price floor for local farmers on cotton around March 2011 in an effort to boost production when global cotton prices were soaring to the moon. When market price fell below the price floor, the Chinese government would then step in and purchase physical cotton at the set price during harvests, temporarily store it in state reserves, and sell it during time of shortage. The original intention of the policy was to ensure farmer's profitability, thus stability in cotton production and national security for China.

Unfortunately, like many good-willed government actions, intervening in the free market always leads to negative unintended consequences. Because the price floor was set too high, local farmers produced much more cotton in the coming season even as global price crashed. Globally, farmers were reacting to high cotton prices and production hit record highs as well. As a result, China cotton ending stocks ballooned to as high as 14.5 MMT by the end of season 2014/2015, more than half the world cotton production at the time (world production: 24.2 MMT). The cost of storing those cotton became very burdensome for the Chinese government, and the Chinese textile industry, suffering from artificially high domestic cotton prices, moved many of their mills overseas in order to survive.

The reduced cotton stock in China is very positive for prices going forward. For years, high Chinese cotton stock had been acting as an albatross around the neck of cotton price. So, as long as high stocks remain available, cotton prices have no chance at any sort of sustained rally because everyone knew Chinese could have easily dumped a lot of cotton onto the market if there were a shortage and price spike. With the high inventory coming down, a major anchor for the cotton market has finally been removed - the next time we suffer a shortage due to underproduction, prices may easily move higher past $1 mark.

USDA estimates global ending stock at 73.19 million bales for the current 2018/2019 season. With a stock to use ratio of 58%, we are currently near the higher end of normal range. However, we need to keep in mind as well that nearly half of these stocks are in the hand of Chinese, and elsewhere in the world, the supply situation is actually tighter (51%) than what we think. I do not like to use ex-China stock figure to paint a bullish picture on any commodity, but we certainly need to take such cases into consideration when performing supply and demand analysis.

Not all rainbows and unicorns for cotton

This does not mean cotton is going to soar above $1.00 and we should all go long today. After two consecutive deficit seasons, cotton tried to rally late 2017. Prices hit as high as $0.95 and some market participants thought it could even fly past $1.00. Unfortunately, for bulls, cotton stocks are still ample, and the trade war went into full swing this summer, affecting sentiments. Markets pulled back rather quickly as the tariffs hit and optimism faded. On 2nd December, President Trump and President Xi declared a trade truce, and cotton prices, along with most other commodities, rose sharply. The rally couldn't last, however, and prices turned lower in search of a bottom. 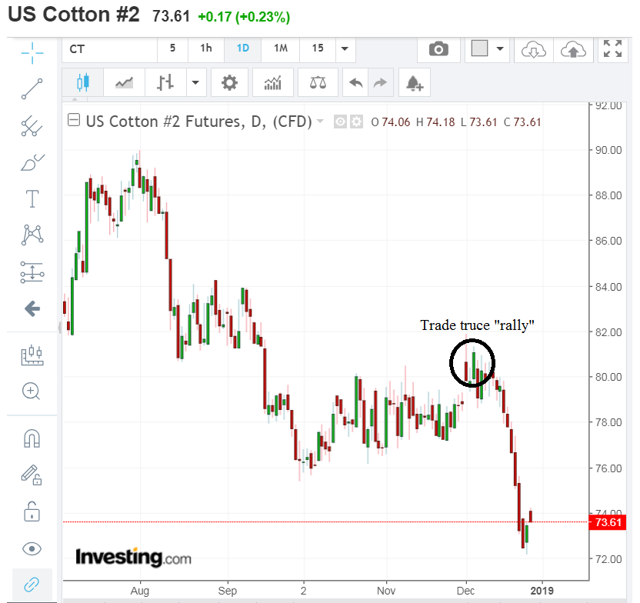 Trade truce or not, prices continue to decline from the summer high; Source: Investing.com

Cotton bulls should not count on an announcement from the Chinese government to import a large amount of cotton from the United States as well. First of all, the Chinese government is still trying to de-stock and sell off their state reserves in this season. What's the point of buying from the US today and auctioning reserves tomorrow? It's not the Chinese government's job to trade cotton. Even if they do make such an announcement, it's still hard for me to be bullish. China announced multiple soybean purchases after the trade truce, yet soybean prices are trading lower today compared to December 3rd, the day after the trade truce was declared. I feel any sustained price rally will have to come from real consumer demand, and cutting tariffs back to zero will be the best way to stimulate import and real demand in China.

Going into next season, expectations are high that the US will produce a large cotton crop. Dr. John Robinson reportedly said that he expects the next cotton crop to be as large as 21 million bales (2018 est: 18.59 million bales). This has likely contributed to the most recent selloff. Currently, I expect prices to consolidate around these levels and reach a range of 70-80 cents. Recent reports regarding poor weather in India capping production is likely to provide support and prevent further price weakness, at least in the short term. USDA will provide the first forecast on next season's crop size in their May WASDE report. If the rest of the world happens to plant more cotton than the previous season as well, then prices could certainly move lower going forward.

Disclosure: I/we have no positions in any stocks mentioned, and no plans to initiate any positions within the next 72 hours. I wrote this article myself, and it expresses my own opinions. I am not receiving compensation for it (other than from Seeking Alpha). I have no business relationship with any company whose stock is mentioned in this article.