MUMBAI, Jan 7 (Reuters) - Indian cotton exports have begun to slide as premiums over benchmark U.S. futures have jumped on expectations of lower output at a time when there is strong demand from local textile mills, industry officials said.

The higher premiums sought by India, the world's biggest cotton producer, could force Asian buyers such as Bangladesh, Vietnam and China to increase purchases from other suppliers such as the United States, Brazil, Australia and African nations.

"Exports are nonviable. We are selling a small amount to Bangladesh, but other buyers are not purchasing," Vinay Kotak, director at Mumbai-based Kotak Ginning and Pressing Industries Pvt. Ltd told Reuters.

Indian cotton is being offered at around 135 cents per lb, cost and freight-basis, to buyers in Bangladesh for January and February shipment, nearly 20 cents over U.S. futures, dealers with global trading firms said. Usually, India charges a premium of 5 to 10 cents/lb over U.S. futures.

Record domestic prices could stifle exports in the 2021/22 marketing year ending on Sept. 30, Kotak said. He predicted India will ship just 4 million bales compared to 7.8 million bales a year ago as buyers switch to rival suppliers. 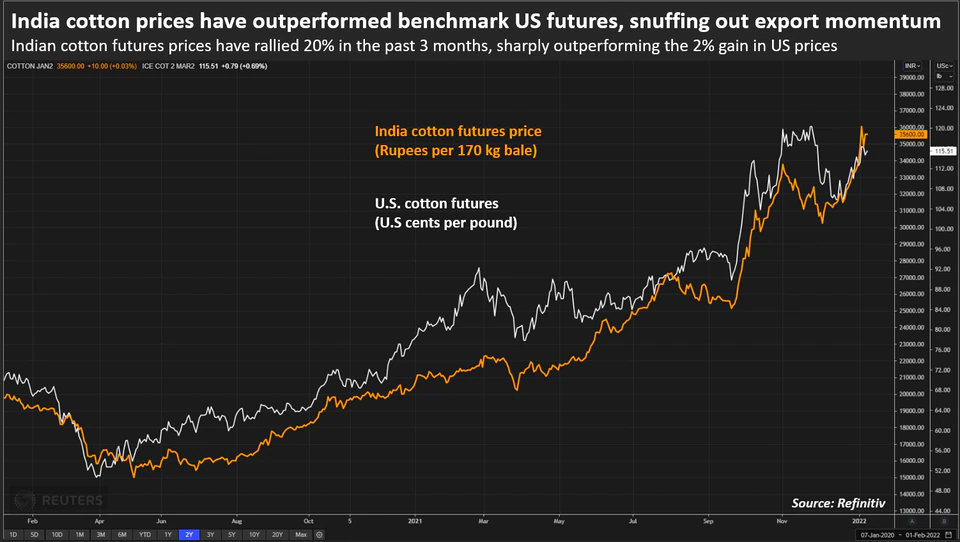 Indian mills have exported 1.8 million bales so far in the season and are likely to ship around 1 million bales in January and February, dealers said.

A few buyers from Bangladesh are paying higher prices for Indian cotton as they need prompt shipments and want assurance of delivery, said a Mumbai-based dealer with a global trading firm.

Nearly half of India's cotton exports to Bangladesh are via a land border, making shipments more reliable than from rival suppliers.

Bangladesh also buys cotton from the United States, but U.S. cotton crop will become available only after March and there is no guarantee that shipments would land on time as labour shortages caused by the latest wave of the COVID-19 pandemic could exacerbate congestion at ports, the dealer said.

India's cotton production could fall to 34 million bales in 2021/22 marketing year, down nearly 4% from a year ago as crops in key producing states were damaged by rains during the harvesting season, Kotak said.

The lower output is reflected in spot markets, with daily trading volumes dropping to around 175,000 bales, whereas 250,000 bales would be more usual at this time of year, said a New Delhi dealer with a global trading firm. 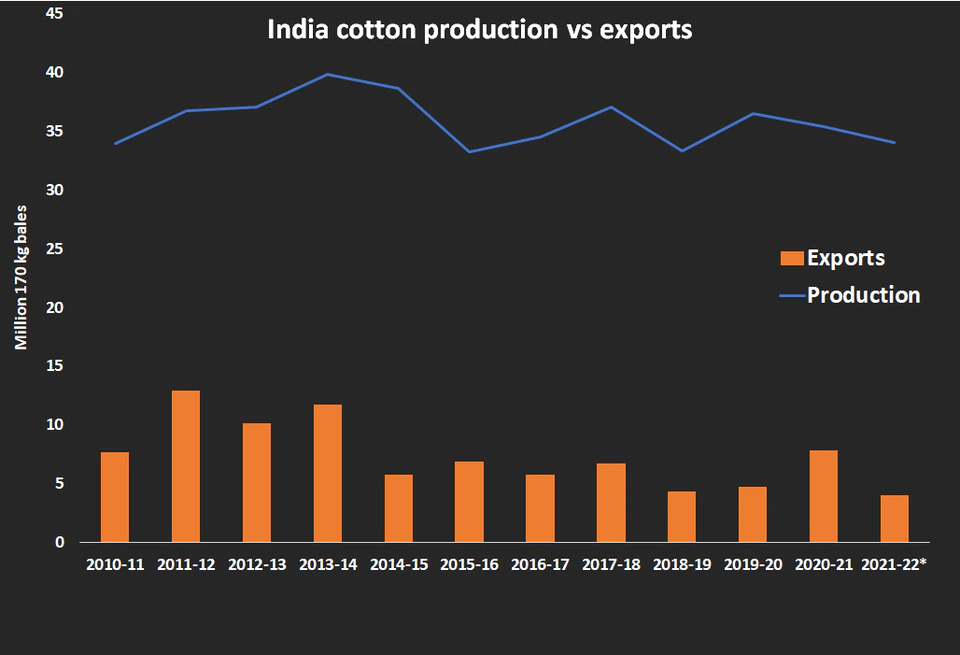 "Farmers know the crop size is low. They are releasing stocks slowly, anticipating a further rally in prices," the dealer said.

Indian spinning mills are aggressively buying raw cotton as export demand for yarn is robust, said a yarn manufacturer based at Ahmedabad in Gujarat state.

"Mills are building stockpiles. Local consumption could rise above 35 million bales this year. We may need to import good quality cotton," he said.

"Imports would land in bulk if government removes the import duty," Kotak said.

India imported 1 million bales in 2020/21 and in the current season traders have contracted to import 700,000 bales, the New Delhi based dealer said.

The country needs to import 2.5 million bales this year to arrest further gains in local prices, the dealer said.