INDIA: Why mills aren’t worried about low cotton production yet 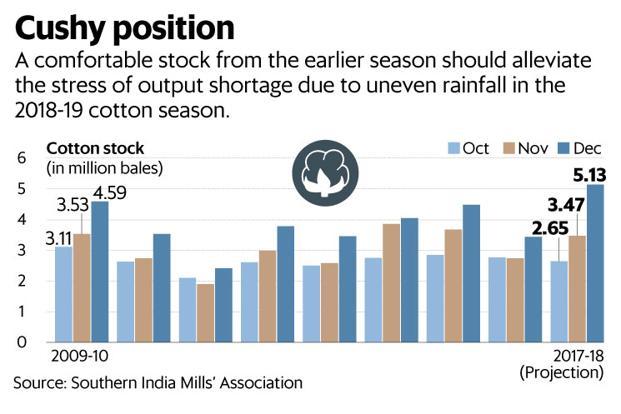 A comfortable stock from the earlier season should alleviate the stress of output shortage due to uneven rainfall in the 2018-19 cotton season. Graphic: Mint

News reports that cotton crop yields will hit a three-year low in the October 2018-September 2019 season have set alarm bells ringing on the Street. A low yield implies lower output and higher cost of production. This could raise cotton prices and put spinning mills in distress. The moot question is how severe the impact on profits of spinning mills will be. Will they spin a woeful yarn with high input costs in the near future?

Estimates from the Cotton Advisory Board point to production of 36 million bales (one bale = 170kg) during the 2018-19 cotton season compared to 37 million bales in the previous year. Drought and uneven rainfall in Gujarat and Maharashtra is likely to pull down the average yield.

However, spinning mills do not look distraught, at least yet. According to K. Selvaraj, secretary general of the Southern India Mills’ Association, “The situation is comfortable after the arrival of the initial crop in the market. Also, the last season ended with higher than normal cotton stock position that would act as a buffer for the current season.”

So far, cotton prices have softened. After touching ₹136 per kg (Sankar-6 variety), the price has eased to ₹124 per kg. On the other hand, robust demand for yarn both in domestic and international markets has supported yarn prices. A 35% jump expected in yarn exports between April and October from a year ago and a 25% growth in overall textile exports will bolster yarn prices in the near term.

Stable demand and production would kick in benefits of operating leverage too. This should help sustain operating margins if not improve them. That said, there are challenges of rising wage and interest costs.

In other words, lower cotton output may elevate prices at the end of the current cotton season. But, a stable demand for yarn will help minimize the impact on mills’ profitability.