When shopping for tools, a favorite soft drink or jeans, which brand are you likely to choose? "You're going to choose the brand you're most familiar with," said Steve Dyer, global head of marketing, Louis Dreyfus Company, and head of ProCot Cooperative. And when given a choice, "We want people to choose U.S. cotton." 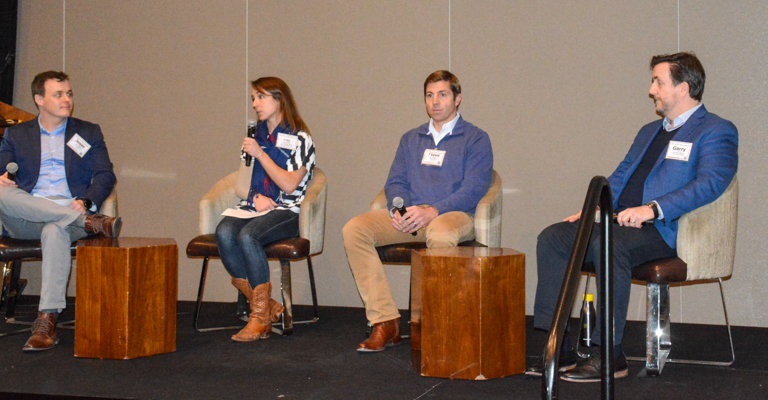 "We've got to make U.S. cotton where it's the sustainable brand," said Dyer, who, along with the other panelists, serves on the board for the U.S. Cotton Trust Protocol, a cotton production assessment system that measures production practices and progression toward long-term sustainability goals.

"It's about education. With the U.S. Cotton Trust Protocol, we're providing a solution and educating people on why they want to choose U.S. cotton. The marketplace is hard enough," Dyer said. "We don't want people to have an easy alternative. We want them to buy U.S. cotton."

Customers, along with investors, are becoming savvier, says Schillo. "We have to answer questions we had the luxury of not having to address before, down to the specifics of, 'Where is your biggest carbon footprint across your supply chain?' Even if we're not directly responsible for it, we kind of are — it comes back to our name."

Levi Strauss' answer to those questions is data. "Where I see real strength in the U.S. Cotton Trust Protocol is that we will have information we can point to and say, 'Look, we're making an impact, and this is what we're behind.'"

Previously, sustainability labeling was like the "Wild West," she says. As long as a product was labeled "sustainable," that was enough. "But, that's not acceptable anymore."

Bell describes the sustainability story as an opportunity for U.S. producers. "Farmers, by default, are sustainability experts. You have been, your grandfathers and great-grandfathers have been because it boils down to getting more with less. So, treating every single drop of water, every kilowatt of energy, every single drop of oil, and gallon of gasoline as a precious resource, it needs to be maximized."

"The true definition of the triple bottom line, having that economic component, means that in hard times, those practices you're still going to continue to do, if they don't deliver an economic value, then essentially those are the ones that are going to get dropped when things get tight," Bell says. "At the heart of it, that's essentially what sustainability is. It's not complicated. People have complicated ways of looking at it, but the reality is it's a tremendous opportunity."

Schillo, who has been with Levi Strauss for the last five years, says the company has been concerned about sustainability since the 90s when overseas labor issues came to the forefront. Since then, their program has evolved and focuses on four key areas: climate change, chemical usage, water usage, and people.

"We were born in the supply chain, but now we're touching all parts of the business."

Because brands and retailers are being asked for greater clarity and to adhere to specific standards, Schillo says Levi is continuing to push the boundaries and encourage the industry to move in that direction. "It's a lot of work, and it's not always a direct payback for us. It's an investment our company is making and, in some cases, we're asking our suppliers to invest with us. But when we have our CEO and our CFO on national television talking about the sustainability programs, that's a huge signal it's a business prerogative.

"Sustainability is becoming a license to operate."

But it's also ongoing. "There is no end to this road. It's a road that everyone's going to be on as citizens of the planet," Bell adds.

"When you're in a manufacturing environment or when you're on a farm, if there's a sustainable practice you can adopt, the likelihood is it's going to make you more profitable," Bell said.

"The true definition of the triple bottom line, having that economic component, means that in hard times, those practices you're still going to continue to do, if they don't deliver an economic value, then essentially those are the ones that are going to get dropped when things get tight.

"At the heart of all sustainability programs is this notion that yesterday wasn't good enough. You have to keep doing more. There's always one more drop to save, one more kilowatt to save."

Cumulatively, sustainability has been a lot of small practices that add up to a really big impact."

Another area brands and retailers are facing pressure is with the end of life of their products.

"You take a polyester t-shirt, put it in a landfill, and 500 years later, it's still going to be there. You take a cotton t-shirt, especially one made with cotton thread, and 500 years later, it's not there anymore," Bell said. "The end of life of products is increasingly coming under scrutiny for brands and retailers, so there's many aspects to this that go beyond looking at the raw material and its impact. And cotton has a great story to tell on that front."

Polyester, while cheaper and easily accessible, is not natural. "You’re never going to hear a really great story about a fourth-generation polyester maker," says Bell. "The reality with the U.S. protocol versus any of the other protocols that have been brought to market, except potentially with the e3 from Bayer (now BASF), is the foundation upon which it's built. The U.S. has a structure in place, starting with USDA bail ID number and the verification process. And the scrutiny under which American farmers are doing what they do, whether it's scrutiny from the U.S. EPA or OSHA… no other cotton standard in the world except potentially Australia faces the same kind of scrutiny. So, there's a good solid foundation.

"And when this protocol starts aggregating data, that data is going to be much more believable and usable by brands and retailers, investors and the outside world. There's a credibility factor to this that the U.S. protocol can bring that no other standard is going to be able to bring."

When Daystar asked the panel about the challenges of the U.S. Cotton Trust Protocol, Schillo answered, "Striking a balance between our stakeholder expectations.

"The world is watching. The U.S. is the third-largest exporter of cotton, so what we do is going to set something in motion that will last. As a brand, we have to make sure we're meeting, at least compromising, with the demands of our consumers and those down the supply chain. But at the same time, remembering that the grower is at the center of all of this, and it has to be something that creates value for everyone and rewards those who are participating in creating that positive value."