Futures rallied sharply last Friday after touching 82.54 cents per pound, the lowest price in several months. Monday kept the rally going as the December contract pushed back above 93.0 cents. Prices were relatively stable for the rest of the week. Prices made their high on Wednesday at 94.85 cents, but finished the week at 91.60 cents, up 789 points since last Thursday. Daily trading volumes were strong as futures bounced off of their lows but returned to normal summer levels, i.e. low activity, by the end of the week. Open interest continued to edge higher as new longs enter the market. The total number of open contracts grew by 3,109 contracts to 180,199.

Last Friday’s rally was largely fueled by relatively positive economic data releases. U.S. retail sales were better than expected, while international trade prices were lower than expected, and consumer sentiment was better than hoped. The news helped bolster the narrative that inflation may have peaked, which cheered investors. Since then, a slew of housing data has shown that the construction sector and home purchases are continuing to slow in the face of higher home prices and mortgage rates.  Business outlooks and jobs data are also tilting toward indicating a recession is coming, which ironically has many investors hoping the Fed will relent hiking quickly implied by recent CPI data. On top of it all, the European Central Bank decided to raise their key rate by 0.5%, their first hike in 11 years, which helped pull the U.S. Dollar further off of recent highs. The cheaper U.S. Dollar helps reduce the headwind on dollar denominated commodities like cotton.

There are only two weeks left in the 2021-2022 marketing year, but that did not stop merchants from booking another 54,100 Upland bales of net new sales. New sales for 2022-2023 were larger at 113,200 bales, and there were also sales of 45,900 bales for delivery in 2023-2024. The total increase in U.S. export commitments was 213,200 bales, which is relatively healthy given the expectations of significantly lower supply this season. Shipments were also unseasonably strong at 336,100 bales including Pima. Although smatterings of cancellations have appeared on recent reports, new sales remain strong enough to offset them. There is some growing concern as higher priced cotton from old crop ships to mills, but the genuine shortage of cotton heading into the new crop seems to have kept a broader wave of cancellations in check for now.

Broad spread heat stress and drought have continued to punish the Southwest crop, or what remains of it, and have spread concern to the Mid-south. Soil moisture levels are extremely low from West Texas all the way to Mississippi, leaving just the Southeast in pole position for crop prospects. The share of U.S. cotton rated as “Good” or “Excellent” on the weekly Crop Progress and Condition Report is at a multi-year low for this week of the year, and that doesn’t include what’s already been abandoned. Thankfully there are improved chances of rain starting next week, stretching from New Mexico through Tennessee. Southwest rains may be spotty, but the Mid-South in particular should get some relief. Temperatures will stay higher than normal for the next week but will moderate slightly. Some forecasters are hoping for a break in the pattern, but the outlook for the fall is still dry. Our region is still hoping some tropical system could sneak in to change things as the National Hurricane Center expects 140-150% of normal tropical storm activity this season. With most of the crop in bloom at the moment, any rain is needed sooner rather than later. 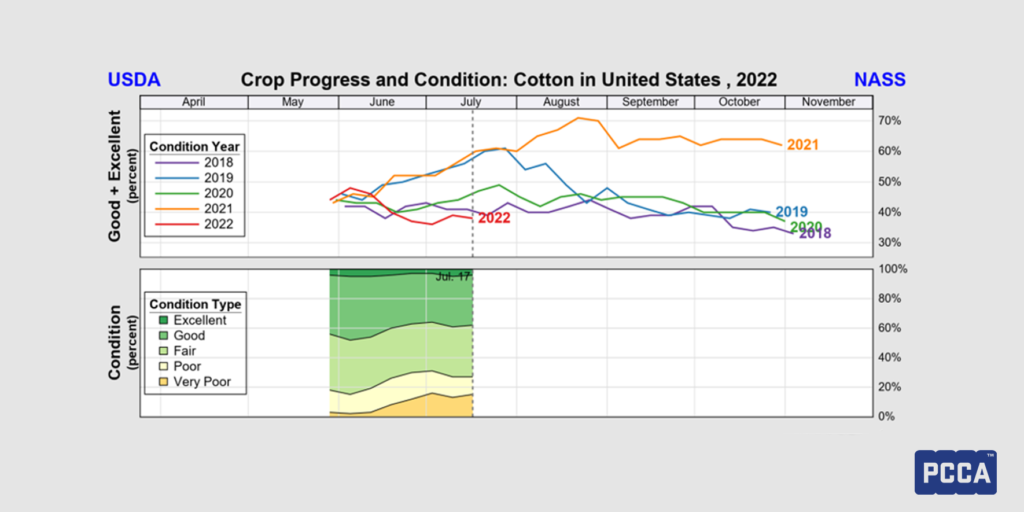 Traders will definitely still watch the weekly Crop Progress and Export Sales reports next week, but the state of the market suggests that macroeconomic data will likely have more effect on the daily direction. Institutional traders and hedge funds are still trying to figure out whether they wish to buy, sell, or hold commodity positions, so next week’s Federal Open Market Committee rate decision and the U.S. Q2 GDP and Core PCE figures are likely to take central focus.

In the Week Ahead: