A rise in international cotton prices has had a ripple effect on local yarn, affecting garment shipments, especially of knitwear, during the ongoing coronavirus pandemic.

On the other hand, between July last year and January this year, international cotton prices went up nearly 28.60 per cent.

In July, New York futures market was trading every pound of it in the range of 63 cents to 63.30 cents. However, yesterday it was ranging between 79 cents and 80.25 cents per pound.

Local spinners, traders, millers and consumers import cotton from the futures markets placing booking in advance as local growers can merely supply 2.50 per cent of the annual requirement of 75 lakh bales (one bale equals 480 pounds).

Charges for its transport to the mills adds to the local importers' costs, which also has an impact on yarn prices. 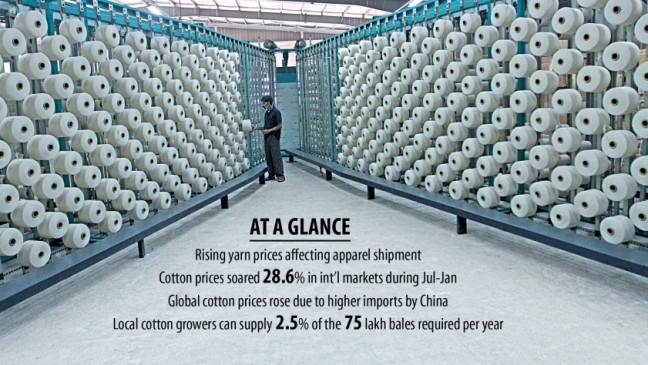 Cotton prices have gone up in international markets mainly for increased imports by China, the largest consumer worldwide, because of a recovery trending among businesses.

Moreover, China and Pakistan, despite themselves being major producers, have increased their import targets because of high prices prevailing in China and lower production in Pakistan.

Similarly, Pakistan aims to import an additional 4 lakh bales, according to data from a United States Department of Agriculture (USDA) report.

The report also said Bangladesh may reduce its import by 5 lakh bales in the cotton marketing year (August–July) of 2020-21.

This is due to apparel businesses not yet having fully recovered as international retailers and brands were still waiting to place work orders in full because of fresh lockdowns in the major markets of the EU and US, it added.

Prices, which had been in an upward trend before the pandemic, retreated sharply from January to April, with the New York futures falling to a 10-year low.

However, prices have rallied and now exceed pre-pandemic levels for factors including recovery in use by mills, said the USDA report.

Covid-19 had a dramatic impact on nearly every sector of the global economy and cotton was no exception.

Comparing the February 2020 USDA forecasts for 2019-20 and 2020-21 (presented at the USDA Outlook Forum) with that of this month provides an overview of the impact.

As the extent of the Covid-19 impact became clearer, the 2020-21 world use forecast was slashed. However, as components of the world economy have recovered, use has edged up in recent months and is now only 3 per cent below that of February.

The forecast for world use in 2019-20 fell 14 per cent between the February and December forecasts as spinning mills dramatically reduced operations. While the onset of Covid-19 impacts varied by country, mill use forecast 2019-20 was reduced in all major spinning countries.

Monthly use fell by around 90 per cent in the US, China, Pakistan and India from that in the previous year to its worst in the year.

The pandemic's timing has limited its impact on cotton lint production; for example, the 2019-20 crop was already harvested in most Northern hemisphere countries and well developed nations in the rest of the world.

In addition, there has been remarkably little impact on 2020 plantings outside of West Africa.

The 2020-21 crop forecast has largely been driven by weather and pest concerns, with lower production in Pakistan, the US, Greece, Mali, and Turkey, said the USDA report.

With global use forecast down and production largely unaffected, 2020-21 ending stocks are forecast higher at 97.5 million bales, 19 per cent (15.4 million bales) above the February Outlook.

Md Fazlul Hoque, managing director of Plummy Fashions, said yarn prices have increased by more than 40 per cent in a span of only two months.

Unfortunately, local spinners have been taking more time in supplying the yarn as demand was growing from knitwear manufacturers and exporters, he said.

Bangladesh's knitwear export has been performing well compared to that of woven because the use of knitwear items during the pandemic increased manifold as people are staying in their homes for longer periods.

Data from the Export Promotion Bureau (EPB) shows that knitwear exports fetched $8.53 billion of the total $15.54 billion generated by garment items, registering 3.90 per cent year-on-year growth in the July-December period.

Meanwhile, woven items fetched $7.01 billion, which is a decline of 10.22 per cent, showed the EPB data.

For woven items, the raw materials need to be imported as local weavers can meet around 40 per cent of the demand. The rest is imported mainly from countries such as China and India.

Shahid Alam, vice-chairman of Shah Fatehullah Textile Mills and Jalal Ahmed Spinning Mills, a major yarn producer and cotton user, said the demand for yarn was improving gradually in the local market but had not reached pre-pandemic levels.

"We had a lot of old stock of yarn for some months due to bad business. But over the last two months the old stock has been reducing gradually," Alam told The Daily Star over the phone.

Monsoor Ahmed, secretary to the Bangladesh Textile Mills Association, also cited high international cotton prices as the cause for local yarn prices to have gone up.

Nearly 60 per cent of the yarn production cost is connected to cotton while the remaining to other factors. Between October and December last year, cotton prices hovered around 79 cents to 82 cents per kg, he said.