Cotton subsidies have remained a contentious issue in international trade and negotiations at the World Trade Organization (WTO). Farmers of developing and least-developed countries (LDCs) complain that the massive support provided by developed countries, especially the United States, has rendered cotton production uncompetitive in the Global South, leading to a disastrous impact on agricultural growth, export earnings and farmers’ welfare.

The impact is particularly palpable in countries like India, where the crop plays a crucial role in livelihood, reducing poverty and agricultural development. Hence, the implications of the US’ massive support to its cotton farmers and the failure of WTO rules in disciplining cotton subsidies merit a discussion.

The artificial comparative advantage the US enjoys can be gauged from the fact that its per-farmer cotton support is a massive $117,494 (over Rs 85 lakh) compared to India’s $27. 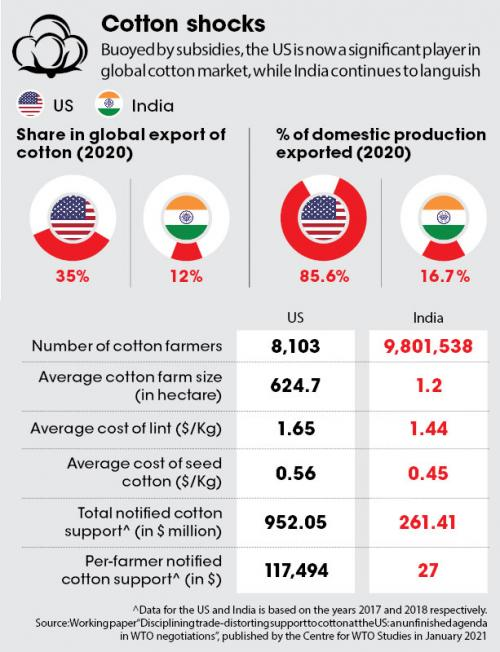 American cotton producers have, in fact, received substantial support through several programmes under 18 farm laws since 1933. The first, the Agricultural Adjustment Act, 1933, was enacted in response to the low prices and farm income during the Great Depression of the 1930s, and provided price support to cotton farmers. Gradually, support grew through market loans, deficiency payments, direct payments, insurance subsidies and budgetary support, among others.

The US disbursed $40.10 billion in cotton subsidies during 1995-2020. Surprisingly, distribution was skewed in the favour of large farmers and corporations — they formed 10 per cent of the total subsidy recipients and garnered 82 per cent of the subsidy. For example, large farming conglomerates Tyler Farms, Kelley Enterprises and Balmoral Farming Partnership each received over $20 million as subsidies during 1995-2020.

In the last decade, especially under the 2014 Farm Act, the major support to cotton farmers was provided through massive insurance subsidies. However, with declining international prices, especially after 2016, and mounting pressure from cotton farmers, it has initiated several support measures like the cotton ginning cost share (CGCS) programme, price loss coverage (PLC) for seed cotton, the market facilitation program (MFP) and the coronavirus food assistance program (CFAP).

Under CGCS, the government provided $3.26 billion to cotton growers to reduce cotton ginning cost. PLC provided a safety net in the form of deficiency payments to mitigate the adverse impact of price fluctuations, while MFP aimed to compensate farmers for losses arising out of the US-China trade war. During the pandemic, cotton farmers were provided additional protection from price fluctuation due to economic uncertainty under CFAP.

Clearly, government intervention plays a vital role in viability of the US cotton sector.

Why WTO fails to fix

Given the crucial role of cotton in livelihood security, export earnings, poverty reduction and farm income, a group of cotton-producing African countries — Benin, Burkina Faso, Chad and Mali, dubbed Cotton-4, or C-4 — have been demanding substantial reductions in cotton subsidies since 2003. The C-4 has consistently highlighted in agriculture negotiations how the asymmetrical and biased WTO rules have been ineffective in disciplining the US cotton subsidies. But it has not helped.

The current flexibility accorded to countries to provide agriculture support is mainly determined based on subsidies prevailing during 1986-88. The higher the subsidies provided during that time, more is the policy space for a country to support its farmers now. Therefore, it was advantageous for countries to inflate their base subsidy.

The Uruguay Round of negotiations under the General Agreement on Tariffs and Trade aimed for large-scale reforms of multilateral trading regime. It included, among other things, commitments to reform highly distorted and sensitive agricultural trade, thus leading to the establishment of WTO.

At the start of the negotiations, in 1986, US cotton subsidy was $2,348 million — 85 per cent of the total monetary value of cotton produced (VoP). On the other hand, support in most developing countries was negative or negligible. For instance, cotton-specific support was (-)$1,084 million in India as the minimum support price was below international prices in 1986-88.

Very few know that the US inflated its base subsidy by considering data only for 1986 rather than taking an average for 1986-88, for many agricultural products in the name of voluntary reforms undertaken during the Uruguay Rounds. In fact, cotton subsidy in the US based on 1986-88 data was $1,702 million, much lower than that declared only for 1986.

By this approach, the US was able to secure an inflated policy space of $19.1 billion to provide trade-distorting subsidies to farmers. Had the calculations been based on 1986-88 data, this policy space would have been limited to $16.81 billion only.

Additional flexibility because of these historical asymmetries means the US can expand support without violating WTO rules, which do not impose any restrictions on the concentration of subsidies among various products. This means if the US uses its whole policy space only on cotton, it can provide subsidies to the extent of more than 200 per cent of VoP. In fact, the US provided more than 60 per cent of VoP as cotton subsidy in some years.

On the other hand, as agriculture support during the base period was negligible for most developing countries, they cannot provide support of more than 10 per cent of VoP.

The C-4 countries’ demand is not unique. Even India, in 2017 and 2018, demanded elimination of additional flexibilities available to the US and other developed countries by limiting their policy space to 5 per cent of voP. However, the US turned the tables in 2018 by questioning India’s own price support programme for cotton at WTO, and alleging that India is providing trade-distorting support to its cotton sector.

This is just an attempt by the US to gain market access for its subsidised cotton sector in developing countries. This unfinished agenda of disciplining cotton subsidies must now be a priority for developing countries at the 12th WTO Ministerial Conference in Kazakhstan, to be held later this year.

Sachin Kumar Sharma is associate professor, Centre for WTO Studies or CWS, Indian Institute of Foreign Trade, Delhi; Aditi Sawant is associate professor at St Xavier’s College, Mumbai; Teesta Lahiri is research fellow at CWS. Views expressed are the authors’ and doesn’t necessarily reflect that of Down To Earth.